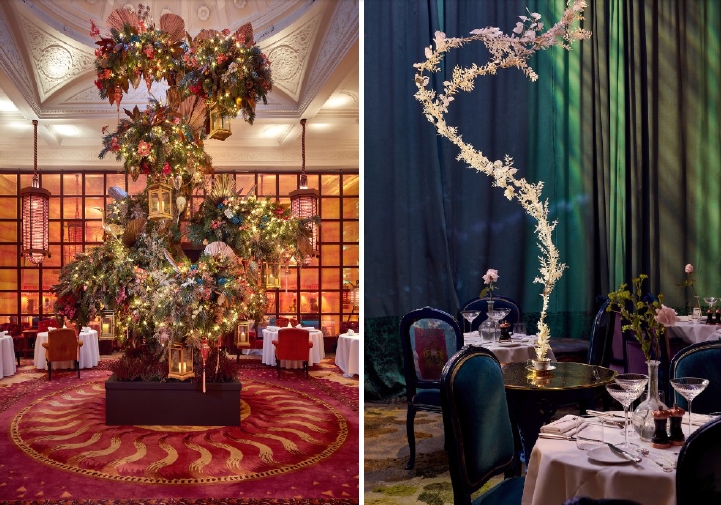 From left: Christmas Tree by Ricky Paul Flowers, Lecture Room and Library at sketch; A storm in a tea cup by Figa & Co, The Glade at sketch

sketch, the iconic artist-conceived food and drinks destination in London’s Mayfair,
presents ‘Christmas here, there and everywhere’, an immersive installation created
in collaboration with over ten leading talents including artists, master florists and
prop makers.

‘Christmas here, there and everywhere’ explores the many Christmas rituals,
customs and symbols rooted in centuries-old traditions from all over the world. The
exhibition is divided into five dazzling installations, each set to celebrate such
diverse traditions.

sketch Christmas Arcades
Award-winning florist and creative director Carly Rogers has brought together a
team of prop makers to transform the sketch entrance into a fairytale street-like
succession of Christmas scenes where the past blends with the present, the real
with the imaginary.

Milliner Piers Atkinson has created a hat shop window display, evoking sketch’s
past as the London atelier of Christian Dior. Featuring some of Atkinson’s most
beloved archive pieces, worn by an array of celebrities, alongside the studio’s
apparatus including a range of hat blocks, hat boxes, mannequins, pins and
threads, the showcase fuses Parisian haute-couture with the glamour of
contemporary East London ‘hatter to the stars’. To complement the installation,
Piers has designed an exclusive collection of lapels and hats, which will be worn by
sketch’s front-of-house staff throughout the season.

Also part of the Christmas Arcades, artist Alex Haw’s ‘Arboreal Lightning’ is a
magnificent LED tree-like sculpture with branches spanning from the cloakroom up
to the Lecture Room’s stairway and down to the reception’s hallway.

Christmas Parol Kaleidoscope
Paper art studio Pom Pom Factory has installed a series of decorative structures
across the Parlour inspired by the ‘Christmas Parol’, a traditional star-shaped
ornament found in the Philippines that evokes the Star of Bethlehem. For sketch,
Pom Pom Factory has reinterpreted the Parol Star as seen through the optical gaze
of a kaleidoscope, radiating throughout the room.

Karen Hsu, founder and creative director of Pom Pom Factory, has adorned the
Parlour in an array of intricate Christmas decorations from mirror starburst stars to
paper gems, tassels and pompoms as well as a three-metre long origami bow.
Complementing Pom Pom Factory’s composition, animator Ping has created a
never-ending kaleidoscope-like video, projected at the back of the cake display
stand. The same effect will be reproduced on the windows with a graphic that
emulates stained glass.

An ethereal column of winter leaves and faded blooms spirals out of a delicate
china teacup, pulling skyward as if caught on an imaginary breeze, the vortex
climbs upwards into a luminous, rolling snow-cloud full of the promise of the first
falling snow.

Over the moon for Christmas
Carly Rogers returns to the East Bar and Pods with an imaginary decor depicting a
scene of a far-away universe wherein a UFO has landed, bringing back from
planet Earth a variety of Christmas paraphernalia. The installation features a four metre wide flying saucer as well as ‘The Eclipse’ by artist Balint Bolygo.

Once Upon a Time at the court of Catherine the Great of Russia…
Ricky Jackson, creative director at Ricky Paul Flowers, has designed a stunning
Christmas tree as the centrepiece for sketch’s three-Michelin starred Lecture Room
and Library.

The tree recalls the opulence of the 18th century royal court of Russia, echoing the
artistic fascination for “Chinoiserie”, the aristocratic fashion of the time.

sketch Christmas programme
Alongside the exhibition, sketch will host a full programme of festive activities
including music entertainment by sketch’s in house trio dressed for the occasion by
fashion designer Karim Tassi as well as a series of dance performances by Ballerina
Jenna Lee and Christmas Carols.