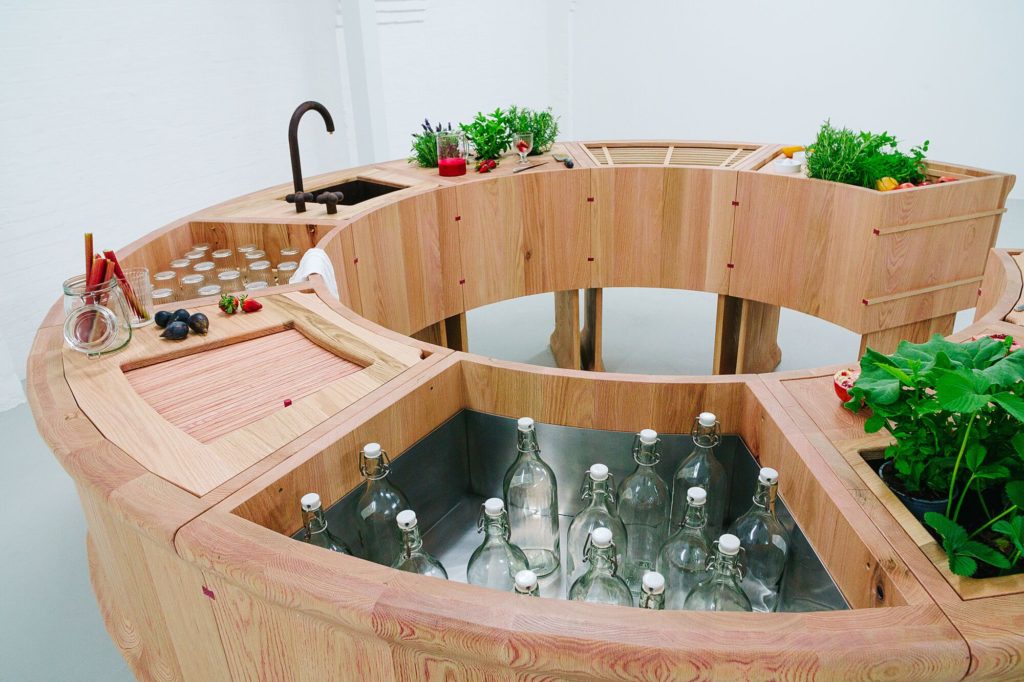 A bar made out of American red oak pushes the boundaries of the material, but also of its designers and maker

“Normally a bar is linear and acts a bit like a barrier,” says Merlin Eayrs, one half of London-based architecture practice Chan + Eayrs. “By making it circular it becomes a more interactive and engaging place where you are a participant but there’s also an element of theatre about it.”

The Blushing Bar was designed by Chan + Eayrs, produced by furniture-maker Sebastian Cox and made out of American red oak supplied by the American Hardwood Export Council (AHEC). It debuts at Wallpaper Magazine’s 10th annual Handmade event during Milan Design Week and responds to the theme of ‘X: With Love’ with a striking pattern of deep pink veins that references the way blood pumps through your body when you’re in love, a circular form that represents infinity and ten (after the roman numeral X) modules that each serve a different purpose.

“We wanted to break down the concept of the bar,” says Zoe Chan (the other half of Chan + Eayrs), “and divide up its different functions into ten components that come together to form a whole.” So the Blushing Bar will have an area for alcohol, another for soft drinks, yet another for chopping up citrus fruit, and so on. There’s even a sink and a tap, all rigorously made out of red oak of course, though the bits of timber that are in constant contact with water have been thermally treated, making the timber much more dimensionally stable in a wet environment, and the tap has been lined with flexible plastic hose and given an elegant brass end. “The tap is a prototype because the piece is also about pushing what you can do with wood and throwing ideas out there to start conversations,” says Eayrs. With its sculptural external facades and sensuous carved feet, the bar combines sculptural qualities with functionality, while celebrating the unique properties of the timber it is made of. “Red oak is an incredibly open-grained porous material,” says Sebastian Cox. “When you shave a thin slice of it and put it against the light, you get this beautiful dappled effect through the xylum and its distinctly large spring growth.”

In order to highlight this idiosyncratic aspect of red oak Cox experimented with pumping colour through it. He assembled a special jig with a locking valve at the top and used compressed air to blow ink through a series of machined holes in the top the wood. “This leaves a deposit of ink on the cell structure of the spring growth of the wood so the new growth is highlighted, but not the rest of the wood.”

Cox had to try various inks before he found the right one. “We had everything from the wood exploding to ink spraying all over the workshop,” he says, pointing to his laptop that is now a vivid stained pink. But eventually the team landed on calligraphy ink, which wasn’t too viscous and also water-based so non-toxic. “It gave this really intense colour but there was also something very nice about using a fine material usually used in calligraphy in such a messy way,” says Cox.

By layering the wood and CNC-milling through the sections in front to reveal the veining and marbling as much as possible, the bar also emphasises the interplay between technology and craft that has been at the heart of this project. “There is this interesting dance between the machine and the hand,” says Chan. “We are using the machines to enhance the way that it is crafted, but it always returns back to the hand to be finished.” Accordingly, the bar features sliding dovetailed joints between each module, chopping boards made of book-matched end grain timber, an ice section with a sliding so-called ‘tambour’ lid (made of slats of moulded and interlocking red oak) and a woven fruit basket in the juicing area. Its curvaceous edges and feet also highlight something else, says Cox. “It gives you that gorgeous view of the wood in multiple dimensions and allows you to appreciate the transition between end grain and the rings becoming side grain, something you so rarely see.”

For AHEC’s part the Blushing Bar is yet another chapter in its irresistible mission to redefine red oak through experimentation and new narratives that challenge industry preconceptions. As a timber it believes red oak has been seriously and unfairly ignored in Europe. “There seems to me to be loads of spurious myths as to why wood industries are resistant to using red oak and a lot of it is a mindset based on a single experience or something they’ve heard or assumed,” says David Venables, European Director of AHEC. “I believe a lot of it is also about fear of change.”

For some, it is the name alone that inspires mistrust, Venables continues, they assume that the wood will be much redder than ordinary oak when the red actually refers to the colour of the tree’s leaves and often it isn’t possible to tell the two apart. Once designers work with it, they tend to fall for its “warmth, grain and colour”, he adds. “Aesthetically it’s very beautiful, it has this pink fleshy tone and it’s also really tactile,” agrees Eayrs. “When you look closely you see all of these tiny dots between the rings and these capillaries, so you very much get a sense of time with red oak too.”

What’s more, Venables says, for this project red oak wasn’t just a choice, it was the only choice, given red oak’s porosity and ability to take on colour through its xylem (or transport tissue). But there’s also a strong sustainability argument for using it. “It’s vastly available and vastly under-used and every year there is far more growth than harvest,” he says. “And, you have to remember, wood is only sustainable if you are using it and it is being replaced, in the case of red oak, by natural regeneration.”

Cox believes “we are in the dawn of the wood age” and that it’s important to invite people to “constantly reconsider wood as it’s the only material that stores CO2 and is such an obvious part of the solution to our current climate crisis”. He also says the inking process trialled in this bar could definitely be scaled up to make large sheets, potentially even for use in housing as well as furniture. “Exactly what we are doing in our studio could be done in a bigger way.”

“It doesn’t have to be used in the traditional cabinet-making sense,” agrees Venables. He is talking about red oak but the same could be said for wood more widely. With its elegant yet playful profile and shape, and its rings of intense pink across its surfaces, the Blushing Bar is as far removed from a traditional piece of timber furniture as you can imagine. It’s wood, but not as you’ve seen it before.