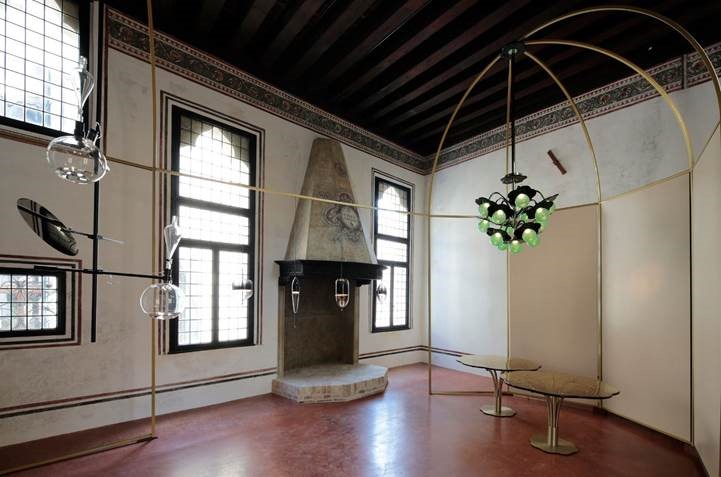 Clover is a chandelier formed of carefully crafted semi-opaque Pulegoso Glass balls, which are attached to a black flower-shaped glass base. The green Pulegoso balls absorb small bubbles in the process of manufacture, which gives the surface an irregular and dynamic texture.

Pistil incorporates Mahdavi’s iconic flower shape and consists of a transparent table-top made with Pulegoso glass and supported by a metal base. The design comes in two colours, yellow and pink, which underlines the designer’s penchant for colourful creations. 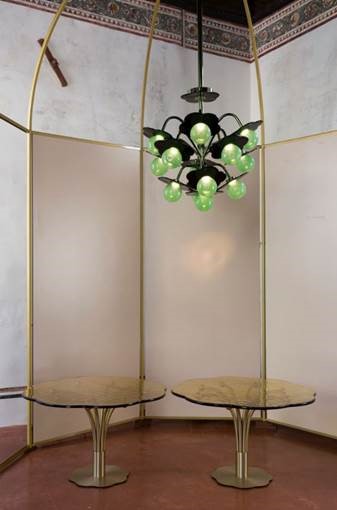 The classic WonderGlass light, FLOW(T) by Nao Tamura was also presented in the new FLOW(T) Obsidian Edition. The new edition is inspired by the reflections of the Venetian cityscape glistening in the evening water, hinting at an imaginary city below the moving surface. There is a border between the world under and the land above. In the city of Venice, where the real world and fantasy coexists, this chandelier is the embodiment of the beauty of dual worlds. FLOW(T) is a customisable contemporary chandelier inspired by the colours of the Venetian lagoon. Each piece enjoys its own shape, and in multiples, they create a sculptural display of lighting.

Tamura further showed the Lab Edition collection for WonderGlass, inspired by the moment at which the sun hits the surface of a lagoon and creates the resemblance of a lens. This effect captures a “spark” and turns it into a source of light. Lab Edition captures this essence of ephemeral beauty: a ripple of light, a droplet hitting the surface of calm water.