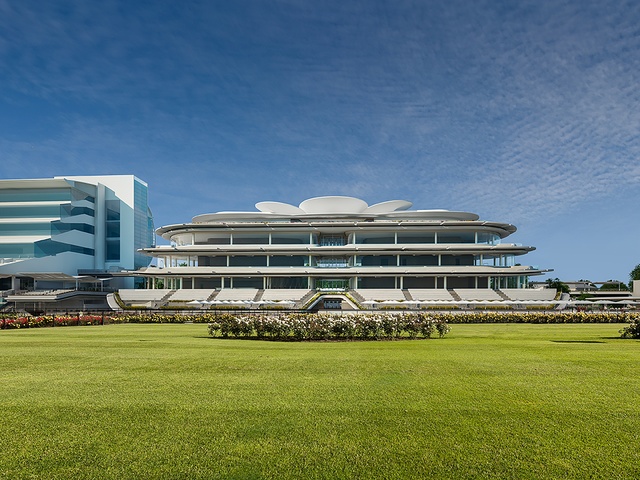 Home of the Melbourne Cup, the Flemington Racecourse is one of Melbourne’s most prestigious landmarks. A key fixture on the city’s calendar, as race fever is set to grip Victoria once again the Victorian Racing Club (VRC) has announced major changes due to take place at this iconic racecourse. Unveiling plans for a stunning new member’s grand stand, the VRC has revealed the existing Members’ Old Grandstand is set to be replaced by a new design by Bates Smart.

The new $128 million stand will be a five-level building, which will accommodate a larger capacity than ever before, as well as a wider array of hospitality venues and a rooftop terrace that encapsulates the glamorous spirit of the races. Providing views on all sides to other parts of the racecourse including the track, Mounting Yards, members’ lawn, parade ring, betting ring, day stalls, other existing grandstands and the winning post, the new grandstand is designed as a real hub of activity that will not doubt blossom into the new epicentre of life at Flemington.

Bates Smart’s design will take a radical departure from the Old Grandstand, which unlike its predecessor is designed to be free standing and viewed in the round. Yet despite their sweeping innovations, Bates Smart have promised that this new building will be sensitive to the racecourse’s rich history.

“The Club Stand is designed to amplify the flamboyant heritage of Flemington, and become an iconic feature of Flemington’s future,” said architect Kristen Whittle, a director of Bates Smart. Indeed, with such an iconic sporting and cultural history, the new grandstand will incorporate the history of the Flemington Racecourse and the VRC into the design, with their stories to be portrayed through the material, pattern and pictorial displays of the building.

Drawing inspiration from the garden setting of Flemington Racecourse, Bates Smart’s new design adopts a curvilinear form that embodies the soft shapes found in nature, with a particular nod to the many pockets of flowers found scattered across the racecourse grounds. “The shape and form of the Club Stand draws from the rich garden context of Flemington which has always framed the spectacle of horse racing in this historic location,” said Whittle. “Presenting itself in the round, the sweeping curves of the Club Stand generate excitement and expectation capturing the spirited energy of a day at the races.”

Racegoers will have the chance to enjoy the old grandstand one last time, with the new club stand due to begin construction following the 2017 Melbourne Cup. The new grandstand will be completed in time for the 2018 Melbourne Cup Carnival.